The Tiburon Loop is one of the most popular rides in the area, pleasant and rolling, with very little traffic once you pass through downtown Tiburon. You can also take the ferry back from Tiburon or Sausalito to San Francisco, which many “advanced intermediate” cyclists do on this route. This route tacks on perhaps the craziest descent in the area, on Conzelman Road. Civilization level is high, and traffic is light except going through Sausalito and into Tiburon. 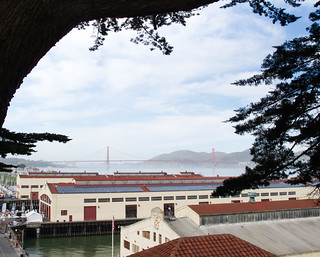 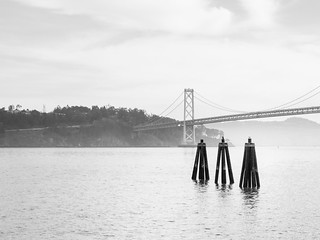 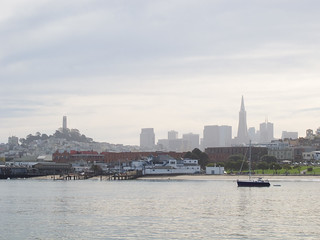 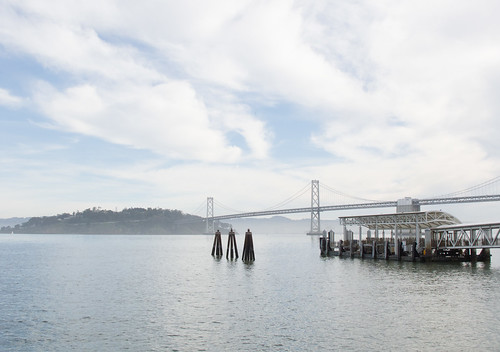 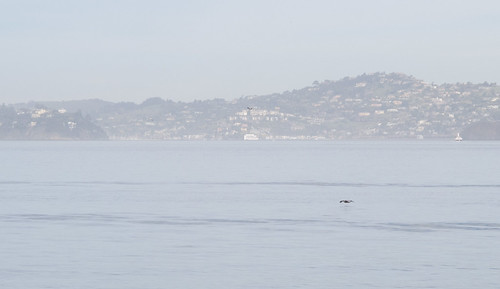 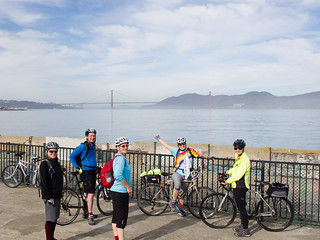 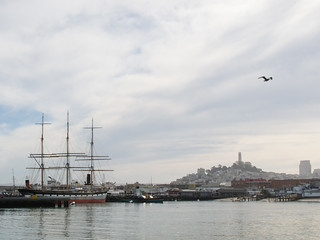 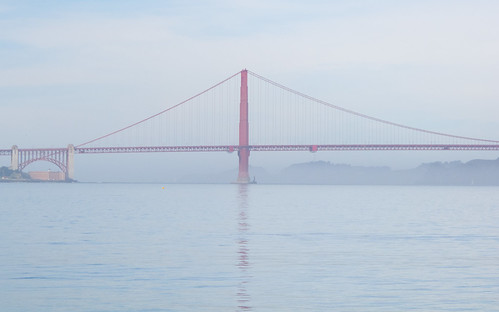 Golden Gate in the mist

Golden Gate in the mist 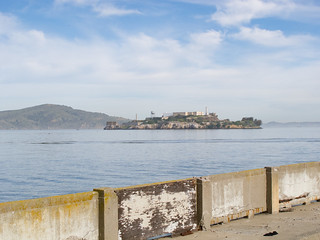 These roads are mostly wide and trafficky. John Daly goes downhill fast. John Muir is a quieter ride near Lake Merced (turn left just before you get to the lake). The left turns on John Muir and The Great Highway are a bit tricky (crossing two lanes of traffic to a left turn lane).

The Great Highway (all rides)

The Great Highway is a blast if the weather is right. There’s a short, somewhat steep hill, then a longer descent on the other side that brings you out to the ocean. After the first light it’s rail-straight and fast; there’s usually a nice tailwind on this section, and it’s pretty and often closed to motor traffic. There’s sometimes drifting sand on the road but usually not on the northbound side. There are traffic lights placed periodically but they’re only to let pedestrians cross to the beach so they’re usually ignorable. At the windmill, turn into Golden Gate Park.

Golden Gate Park is relatively quiet and pretty.  All the roads are wide and well-paved. Most of them have rolling hills. The west side of the park often has a lot of cars parked on the road. Note: The left turn onto Crossover Drive may not be marked; it’s just before JFK Drive goes underneath Highway 1/19th Ave.

Lincoln is a wide road with moderate traffic through the Presidio.  There’s a good climb up towards the bridge, then a descent back towards it; to get to the bridge, turn left just after going underneath the freeway.  After the bridge, there’s a wide, fast descent, then a left turn on McDowell (still downhill) takes you underneath the freeway again; two right turns put you on Mason Street by Crissy Field.  Mason often has a blasting tailwind through the Golden Gate, and it has a long straight section to try out your big ring.

After leaving the Presidio we end up on busy residential streets in the Marina District.  They’re wide but there’s a lot of parking and cross traffic.  There are options to go through Fort Mason, but the pedestrians, dogs, and Blazing Saddles riders are probably worse than the cars.  Bay Street has a steep descent towards Columbus, then goes through a bit of Fisherman’s Wharf.  Embarcadero has a decent bike lane and takes you to the Ferry Building, where you make a right to get to Embarcadero BART.

I usually don’t enjoy riding on the bridge; it’s narrow, shared by two-way bike traffic (much of which is inexperienced tourists), it’s noisy, and there’s often strong winds and fog.  That being said, it can be spectacular on a good day.  Pay attention to what you’re doing; stop at one of the notches if you want to look at the view.

Conzelman is a GGNRA road; the speed limit is never above 25 and in fact is 15 for most of its length. It tends to have moderate traffic. Conzelman climbs steeply for a bit, then less steeply for a while; with awesome views of the bridge, the headlands, and San Fransisco all along its length. You might want to stop to rest at one of the “vista point” turnouts. At the very top of the hill there’s yet another great view. I usually wait at the peak for a significant gap between cars, because afterwards it becomes a narrow one-way street with a descent that is stunning in every sense of the word; do not let your speed get out of control. The really steep part ends after about 2 km and it flattens out, then climbs for a short stretch, than has a more controlled and fun descent on the way to the Point Bonita Lighthouse. Continue past the pedestrian footpath and stop at a lot overlooking Bird Island. It’s a great place for birdwatching if you’re into that, and there are sometimes whales offshore as well. If it’s not too chilly, this is a good place to stop for a snack.

Field/Simmon/Bunker Road is fairly wide and starts with a nice tailwind-aided descent through the rolling hills of the headlands. After about 2 km it starts to climb until it enters a tunnel between West and East Fort Baker. The tunnel is sloped downwards and has a tailwind in this direction, but it’s only one lane (for both directions), so be alert. Wait for traffic to clear and get a good head of steam; it’s slightly downhill, with a tailwind.  Fun! Try to stay in the middle of the tunnel; the bike lane is usually not usable due to debris and sand.

This is a wide, busy road into and through Sausalito.  The descent into town is twisty and fairly narrow; you probably should take the lane.  Once in town, there are usually large crowds of pedestrians and slow-moving cars; keep an eye out.  After leaving downtown it’s more reasonable.  Where the road goes onto the freeway, get onto the bike path on your right.

On weekends the traffic on this path can be out of control; watch out for dogs and people wobbling all over the place.  Other than that it’s reasonably pleasant.

East Blithedale is wide and busy.  After crossing the freeway you can get off it on a parallel set of roads and paths on the bay side.  The paths go almost all the way into downtown Tiburon, but where they get narrow I usually hop back on Tiburon Boulevard, which is wide and a bit less busy.  Stop in town for a snack, or to grab the ferry back.

Paradise Drive starts with a climb, then rolls through quiet, beautiful woodland by the bay.  There’s very little traffic.  The pavement is often not great.  At the fire station, turn left on Trestle Glen, which climbs a short hill and then descends back to East Blithedale to complete the loop.  For a slightly longer ride with a bit more climbing, you can continue past the fire station and take Paradise Drive all the way into Corte Madera, then come back to the bike path via Corte Madera Ave./Camino Alto.